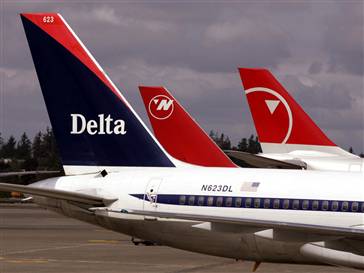 The International Association of Machinists (IAM) and the Association of Flight Attendants are taking advantage of the union-controlled National Mediation Board’s new voting procedures (see background here) by targeting Delta Airlines  for unionization.

There has been a lot of grumbling in labor circles that Obama hasn’t done enough for the unions that supported him so strongly in the 2008 election, but you are not likely to hear much of that in the inner circles of two airline unions that launched major organizing campaigns on Thursday. The unions anticipate that these campaigns may bring some 25,000 Delta Air Line workers into the union fold.

Two labor organizations — the Association of Flight Attendants and the International Association of Machinists — filed the paperwork July 1 with the National Mediation Board to set in motion union elections among Delta’s cabin crew members, baggage handlers, fleet service workers, customer service agents, and others at dozens of airports nationwide. Unless the elections get tangled in new technical or legal challenges, most of the results should be in by the end of the year.