AFL-CIO Boss Richard Trumka, the same guy who pled the Fifth Amendment  before Congress is doing all he can to carry the Democrats’ water for the mid-term elections, including (but not limited to) demonizing Tea Party activists. 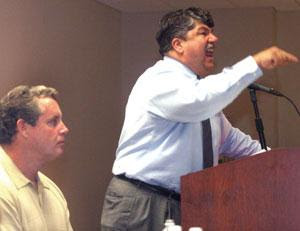 More than 400 people attended the event at the Great Hall at Cooper Union.

a cynical, deeply dishonest and incoherent message—that big government is somehow to blame for the current crisis that the budget deficit will eat our children, and that illegal immigrants took all the good jobs.

Trumka also used his talk to confirm his apparent embrace of socialism.

In the short term, said Trumka, the labor movement has to “recapture the moment and take control of the national conversation.” Building for the future,

we need to fundamentally restructure our economy and re-establish popular control over the private corporations which have distorted our economy and hijacked our government.  That’s a long-term job, but one we should start now.

Union activists, progressives, socialists, and communists converging on Washington this Saturday to reaffirm their commitment to ending free-enterprise and to work to get out the vote in November.  However, Trumka’s comments pointedly show the disdain he has for Tea Partiers, as well as many union members who are tea party activists and don’t ascribe to Trumka’s pushing America into socialism.

For news and views on today’s unions, go to LaborUnionReport.com.

The Concord Project: Fighting for Freedom in the Fall