To fans of the all things Disney, one of the unions that represents workers at Disneyland (located in Anaheim, California) may have just crossed the line.

Unite-HERE, the union that went through a nasty civil war and break-up, has had an ongoing labor dispute with Disneyland for nearly three years.  Over the course of the three years, the union has rejected Disneyland’s contract offers, and has engaged in street theater as well as a hunger strike.

Despite the more dramatic antics the union has engaged in, the union’s latest tactic of passing out flyers saying “Places like Disneyland are magnets for pedophiles” is drawing criticism. 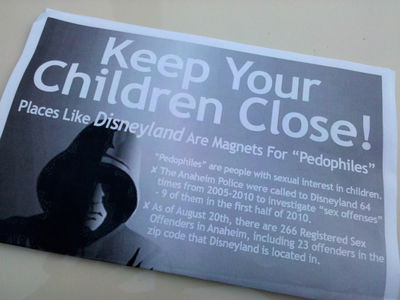 As thousands of guests flocked to the Resort Friday night for Mickey’s Halloween Party, union representatives dressed as Disney characters stood at the Harbor Boulevard pedestrian entrance and handed out a flyer with the headline “Keep Your Children Close” and the warning “Places like Disneyland are magnets for ‘pedophiles’ ” The flyer is printed in English and Spanish, features an ominous illustration of a hooded figure, and bears the message, “A service from Unite HERE.” The bottom half of the flyer lists steps parents should take to keep their children safe, including making sure children know to ask cast members for assistance if they get lost.

Nearly all respondents said the union had crossed a line, using terms like “creepy and misleading,” “completely outrageous,” and “way out of line” to describe the union’s actions. One reader replied, “I’ve been sick of that union’s stunts for awhile now,” and asked, “What can the public do to stop them?” One member asked, “What do they really hope to get accomplished by using these tactics?”

While I have a long-time friend who is a member of this union, and have come to know several other members as this has played out, I am no fan of this union, and this latest tactic is just another example of how out-of-touch and desperate I think its leadership has become. While union leaders and shop stewards plot these elaborate protests and demonstrations, the rank-and-file members are left wondering just why there is still no contract. The union can seemingly afford balloons and flyers, but cannot afford to reinstate the sick pay benefit for its members.

While some union tactics are standard par-for-the-course offensive (like using fake bodies in coffins to protest non-union workers), the tactic of using pedophilia as a scare tactic and attention getter seems to be way out of line.

For more news & views on today’s unions, go to LaborUnionReport.com