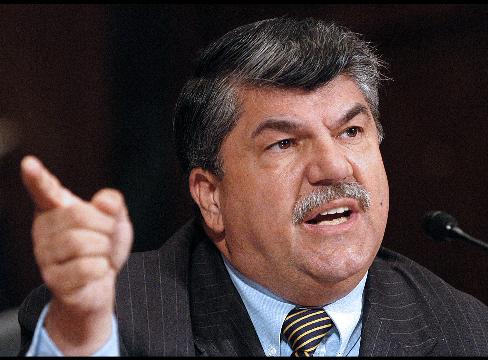 Intellectual dishonesty. Other than, perhaps, sheer hypocrisy, there just doesn’t seem to be any other term that describes the Left’s behavior in the aftermath of Saturday’s massacre in Tucson.

On Monday, AFL-CIO boss Richard Trumka weighed in, stating in a post on the AFL-CIO blog:

We must find ways to passionately debate and even disagree with each other without using words that can give unstable individuals an incitement to engage in violent acts.

We do not know why the shooter targeted Rep. Giffords, or if he was influenced—directly or indirectly—by the outrageous rhetoric that’s become all-too-common in our politics.

But “too much vitriolic, hate-filled rhetoric that we hear on radio and television has demonized public servants and candidates as “enemies” and has made them sounds less than human. In the short run, it may inspire passions and votes. But in the long run, it’s toxic to the survival of rational discussion in our democracy. And it’s not worthy of our great nation.

Perhaps Mr. Trumka missed the news about how the lunatic who slaughtered six people and injured more than a dozen more was not connected to the Tea Party movement, despite accusations from Trumka’s allies across the blogosphere and in the MSM. Perhaps Mr. Trumka also missed the news that a couple (a few actually) of Jared Loughner’s favorite books could have come from any union’s intellectual library or that, according to those who know the madman, Loughner’s political leanings place him more left-of-center (gosh, he may have actually supported John Kerry for President in 2004).  [Did you miss that all of this, Mr. Trumka, or are you just choosing to ignore it so you use this moment to continue heaping blame on the innocent and score political points?]

You see, Mr. Trumka certainly hasn’t condemned CWA President Larry Cohen’s painting the Tea Party as proponents of slavery as “vitriolic, hate-filled rhetoric.” And, Trumka apparently hasn’t condemned his own federation’s writers for comparing those who support the U.S. Constitution’s Tenth Amendment to “cult worshipers.” And, heck, as long as we’re at it, Trumka doesn’t seem to be taking back his statement accusing Tea Partiers as delivering a “cynical, deeply dishonest, and incoherent message” either.

You see, if Mr. Trumka were being intellectually honest, he would be more what willing to condemn the hate-filled rhetoric that leads to violence from his own movement and its allies…

Mr. Trumka, can you state the last time a Tea Party activist put a bloody cow’s head on someone else’s car? No? I didn’t think so.

How about this then…

Mr. Trumka, can you state the last time a Tea Party activist stabbed someone in the neck or attempted to run someone off the road?

Or, at a minumum, Mr. Trumka, are you will to condemn (or take any responsibility for) any of the actions described in this video?

You see, Mr. Trumka, before you tell others what rhetoric they should or shouldn’t use and throw your stones, perhaps you should move out of and away from your glass house.

Summary of NLRB Decisions for Week of August 1 - 5, 2022 mmeyers Thu, 08/11/2022 - 11:49 The Summary of NLRB Decisions is provided for informational purposes only and is not intended to substitute for the opinions of the NLRB.  Inquiries should be directed to the Office of the Executive Secretary at 202‑273‑1940. Summarized Board Decisions General Aire Systems, Inc.  (04-CA-279137; 371 NLRB No. 120)  Darby, PA, August 1, 2022. The Board adopted the Administrative Law Judge’s conclusion that the Respondent violated Section 8(a)(5) and (1) by failing and refusing to provide the information requested by the Union. Charge filed… [More...]

Summary of NLRB Decisions for Week of July 18 - 22, 2022 mmeyers Thu, 07/28/2022 - 07:59 The Summary of NLRB Decisions is provided for informational purposes only and is not intended to substitute for the opinions of the NLRB.  Inquiries should be directed to the Office of the Executive Secretary at 202‑273‑1940. Summarized Board Decisions H.W. Weidco/Ren LLC d/b/a South Jersey Extended Care  (04-CA-288087; 371 NLRB No. 115)  Bridgeton, NJ, July 18, 2022. The Board granted the General Counsel’s Motion for Default Judgment based on the Respondent’s failure to file an answer to the complaint.  The Board found that… [More...]

Summary of NLRB Decisions for Week of July 11 - 15, 2022 mmeyers Tue, 07/26/2022 - 11:36 The Summary of NLRB Decisions is provided for informational purposes only and is not intended to substitute for the opinions of the NLRB.  Inquiries should be directed to the Office of the Executive Secretary at 202‑273‑1940. Summarized Board Decisions Penske Truck Leasing Co., LP  (09-UC-281192; 371 NLRB No. 113)  Piqua, OH, July 12, 2022. The Board (Chairman McFerran and Member Ring; Member Prouty, dissenting) denied the Union’s Request for Review of the Regional Director’s Decision and Order Granting Unit Clarification as it raised no… [More...]

Summary of NLRB Decisions for Week of July 5 - 8, 2022 mmeyers Tue, 07/19/2022 - 11:37 The Summary of NLRB Decisions is provided for informational purposes only and is not intended to substitute for the opinions of the NLRB.  Inquiries should be directed to the Office of the Executive Secretary at 202‑273‑1940. Summarized Board Decisions Southwest Regional Council of Carpenters  (28-CA-262356 and 28-CA-262458; 371 NLRB No. 112)  Las Vegas, NV, July 6, 2022. The Board adopted the Administrative Law Judge’s conclusions and dismissed the allegations that the Respondent violated Section 8(a)(1) by laying off two employees.  The Board agreed… [More...]

Update on Efforts to Secure Full Remedies in Settlements [More...]

The Right to Refrain from Captive Audience and other Mandatory Meetings [More...]

Seeking 10(j) Injunctions in Response to Unlawful Threats or Other Coercion During Union Organizing Campaigns [More...]